Standing on the summit of Mont Blanc, its shadow dominant in the sky, with a sea of cloud 1000 metres below or cycling an average of 100 kilometres for seventy days straight in a cross-Europe tour, from Lisbon to Istanbul, paints a picture mostly seen in high-profile movies or extreme sports channel. What may even be more far-fetched is associating such magnificent desire and fulfilment to a man who spent most of his first five years in a hospital in Vancouver, Canada, battling severe asthma, and who would go on to struggle with this shortcoming for the next six years of his early life.

Indeed Colin did find a way to overcome his major health defect by controlling the attack so much that he could build on his athletic abilities and explore his desire to push his “untrained limits,” as he’d like to put it, and have a “rich life full of crazy and impossible adventures.” His motivation has been to inspire people to push beyond their limits, take calculated risk and see the beauty life has in store for them. This he set out to do by pushing his own body and mind to extreme limits. 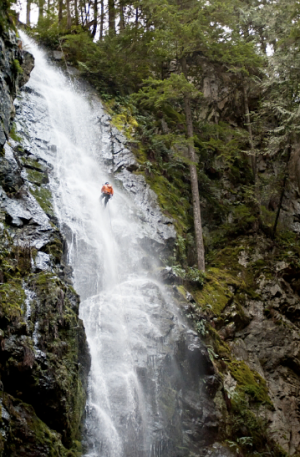 Canyoning near Vancouver, British Columbia.
Growing up, his first notable inspiration came from a high school backpacking trip to an Alpine park where they were treated to the incredible view of the Black Tusk Mountain. He described the mountain “like a giant’s tooth above the rest of the landscape.” Not one to be overwhelmed by the edifice or the breathtaking ability of its view, he challenged himself and within the next year Colin was on top of the Black Tusk Mountain. It was the view of the world below from the summit of the mountain that triggered his sense of adventure and desire to climb even more.

Since then, the crave for adventure and the desire to push beyond physical and mental limit has been on an upward trajectory and has propelled him to climb mountains in Canada, France and Morocco, build a homemade whitewater raft and raft through the River Capilano with its huge rapid, get involved in extreme skiing, ice-climbing and most recently sky-running – which basically is running up mountains. His effort and commitment has also driven him up the Grouse Mountain where he holds the current joint-record for the “Grouse Grind” trail in Vancouver.

Not to say it has been a walk in the park – these sports are quite dangerous just from the thought of it – as he recalled moments in his adventures where he was faced with difficult and scary situations. The first being on Mount Baker where his lack of preparation made him go with just two cans of baked beans and little water that ended up freezing. It left him, like he said, “super dehydrated and hungry” but most importantly with lessons learned. He also recalled another climb where his climbing partner lost control and was sliding towards a massive ice cliff from an exposed icy ridge with a 500 metre drop on either side. They had failed to rope themselves together. It seemed like he was going to witness someone die right before his eyes but thankfully one of her shoe spikes made grip and prevented her from sliding further. This enabled him reach and save her.

They made it to the summit of the mountain after the initial trembling and subsequent laughter. “People may think after a situation like that, that we’re crazy to keep on going but it’s this immediacy and constant reminding of our own mortality which makes us feel more alive in the mountains than anywhere else.” A remark he made to cap-off the experience.

His current project is a massive undertaking called “The Adventure Grand Slam” where he seeks to test the limit of the human body and mind by exploring some of the most extreme and beautiful environments on earth. The adventure involves climbing the highest mountains in each continent and skiing on the North and South Poles. He is also open to collaborations and sponsorships for this project.

I asked him for a word or two for those looking to follow in his direction and he simply stated: “be humble, always seek to learn and improve, don’t consider your climb a success until you’re back to the bottom, don’t take on something big too soon, don’t be afraid to be afraid and above all, have fun and enjoy the moments.”

Colin Pither is a Master in International Business student (MIB34) at Grenoble Graduate School of Business, France. He blogs at: Crack and Ice Addict.

What are your thoughts? Cancel reply

This site uses Akismet to reduce spam. Learn how your comment data is processed.